Why food cooks so much faster in a pressure cooker 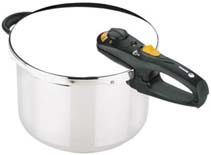 The Fastest Cooking,
Most Delicious Meals

Pressure cookers are the fastest way to cook delicious meals.  Below is a description of how a pressure cooker works.  The basic pressure-cooking principle is quite simple and offers many advantages over using an ordinary pot, slow cooker or an oven.  Modern new generation pressure cookers are also very easy and safe to use.

Here’s what we cover on this page:

How Does a Pressure Cooker Work? 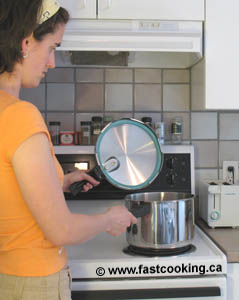 Pressure cookers are widely used in many parts of the world.  A generation ago, they were an essential tool in Canadian and American kitchens;  today, they are making a comeback.

Pressure cookers are widely used in Europe (especially food-loving France and in Spain where they are called an olla express), Asia, South America and India and have been making a resurgence in the U.S. and Canada with over one million in use in the U.S.

Pressure-cooking is a cooking method that uses steam sealed in a pressure cooker, which is a special airtight cooking pot.  Sealing a liquid such as water, wine, stock or broth in a pressure cooker traps the vapour that rises from the liquid.  This in turn raises the pressure inside the pressure cooker along with the maximum temperature that the liquid can reach.  The increased temperature and pressure significantly speed up the cooking process.  The pressure infuses the hot steam into the food.  Pressure-cooking can cook foods in 1/3 the ordinary time on average and often over 10 times faster.  Compared to a microwave, the food tastes considerably better and compared to slow cooker, only takes a fraction of the time.

The section below answers in more detail the question:  “how does a pressure cooker work?”

what to look for when selecting a pressure cooker

The Higher the Pressure, the Shorter the Cooking Time

Cooking temperatures at different pressures:
the higher the pressure, the shorter the cooking time. 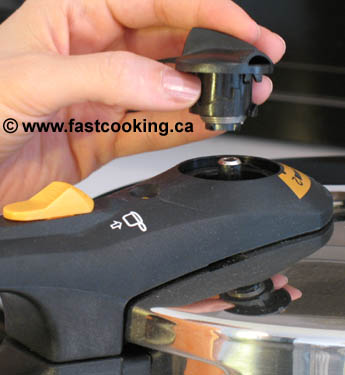 The steam pressure inside the pressure cooker cooks food much, much more rapidly than just boiling or baking food.  Unlike microwave cooking, pressure-cooked foods become moist and succulent with an intense intermingling of flavours.  Pressure-cooked foods retain much more of their vitamins and nutrients than boiled or commercially processed foods do.

history of the pressure cooker

More Time for You